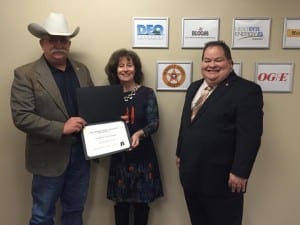 On Thursday, Canadian County Sheriff Randall Edwards was presented with a certificate of appreciation by Natalie Shirley, President of OSU-OKC, and Oklahoma Secretary of Education under Governor Mary Falin. Edwards’ recognition took place during the University’s renaming ceremony of the new Science, Technology, Engineering and Mathematics (STEM) department; which was previously known as the Science & Engineering department.

Sheriff Edwards’ partnership led and enabled OSU to develop a computer forensic course modeled after the Forensics Investigation Division he created upon taking office in 2008. The course which has blossomed into a degree program is unique to the state, and only made possible through the leadership and support of Sheriff Edwards, as was stated by President Shirley at the ceremony.

“It was extremely humbling to be recognized by OSU-OKC President Shirley at the ceremony this morning, and I’m so pleased that our efforts at the Sheriff’s Office have been able to impact so many people pursuing an education in this field,” Said Randall Edwards, Canadian County Sheriff.

In addition to the renaming ceremony, President Shirley was joined by other faculty and staff, as well as other Corporate Partners who have contributed to the development of the STEM program at OSU-OKC.

Included in the Thursday morning ceremony was the revealing of a Wall-of-Fame dedicated to recognizing the corporate sponsors and partners who have poured themselves and their resources into making sure the OSU-OKC STEM program is a success.