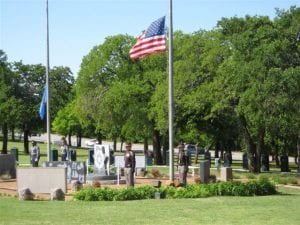 the west grounds of the Department of Public Safety Headquarters at 3600 Martin Luther King Avenue, in Oklahoma City.

The Memorial is maintained and the Annual Memorial Service is hosted by Oklahoma Law Enforcement Memorial, Inc. which is supported solely by tax deductible donations. No government funds are used to maintain the memorial or host the annual memorial service.

The idea of a memorial to honor all of Oklahoma’s law enforcement officers who died in the line of duty came about in 1965 after the State Legislature authorized a permanent headquarters for the Oklahoma Department of Public Safety in Oklahoma City. Several members of the law enforcement profession felt that the site of the new headquarters would be an appropriate location for the construction of the memorial. They also believed that the project should be carried out by law enforcement officers. The Board of Directors of the Oklahoma Sheriff and Peace Officers Association and the Oklahoma State Lodge of the Fraternal Order of Police endorsed the idea and agreed to share the cost of construction and maintenance of the memorial.

In 2001 the group adopted an official logo designed by O.S.B.I. Agent Harvey Pratt,

went on line with a web site, and started working toward becoming a formal organization. By the thirty-fourth annual memorial service on May 10, 2002, the group had become incorporated as a non-profit organization named the “Oklahoma Law Enforcement Memorial, Inc.” and shortly afterwards was classified as a charitable organization under Section 501(c) (3) of the U. S. Internal Revenue Code.

In 2018 the memorial board took on a monumental task of renovating the memorial. Over the years storm water drainage had caused the memorial to sink. It was estimated to cost over $150.000 for the repairs. With only half that amount readily available a search went out for assistance. Through a contact of Sheriff Charlie Dougherty Lincoln County a man named David Bess stepped up and offered to help. Originally the board thought he was willing to only do some of the work but David felt that this was his calling

and offered to completely renovate the entire site. David owns a company called BridgeCo which specializes in construction of bridges all across the state. He started work on the project in March of 2018 and completed the project just in time for the May service. The last phase of the project was to add another granite table in honor all of Oklahoma’s fallen K-9 partners which was also completed in time for the service.