On Friday, August 14th, 2015, at the Oklahoma Sheriffs’ Association’s Awards Banquet we were proud to award Sheriff Bobby Whittington of Tillman County with the Sheriff of the Year Award.  Sheriff Whittington has upheld the professionalism and dedication required for the elected position of Sheriff, not only for his county, but for his State as well.  He has worked diligently across the state and with multiple legislators to change language and promote law-making which aids the Sheriffs’ Offices in Oklahoma.  Furthermore, Sheriff Whittington has worked with a number of Judges and Legislators offering training on self-defense and situational awareness, all on his own personal time.

Moreover, he has created a new addition to his Office by establishing a SWAT team.  This valuable resource of a team is highly skilled and extremely organized, prepared to provide aid at a moment’s notice.  This, too, has been completed at the Sheriff’s own time and expense.

In addition to these extra duties, Sheriff Whittington has worked tirelessly on numerous cases including recovering stolen property for victims across Oklahoma.  He has solved cases ranging from first degree rape to arson, to tracking down an accused sex offender that had been at large for over twelve years.  This Sheriff is passionate about solving these cases and works determinedly to do so to keep the citizens of his county safe.

However, not all of his accomplishments are easily spotted.  He is not only a successful and admirable Law Enforcement Officer, he has also proven himself to be a fiscally responsible leader in his community.  Working endlessly with the Oklahoma Department of Corrections, Sheriff Whittington has been able to provide extra income for his office to employ extra Deputies for patrol, increasing employment opportunities for his smaller county, as well as improving the overall safety of the County with growing Law Enforcement presence.

This year, we wished to recognize this Sheriff’s professionalism which goes far beyond what the public may expect.  Sheriff Whittington works ceaselessly with his Deputies and jail staff leading by example and holding his people to the standard that he holds himself to, resulting in one of the most professional and versatile Sheriff departments in the state. 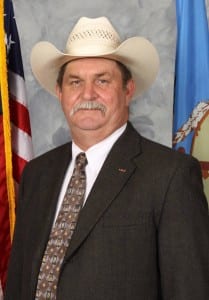