HB2272 passed out of the House 95-0 and the Senate 45-0. It has been moved to the Governors desk for signing. The OSA wanted to take this time and recognize those who worked hard to get this bill passed. Rep Josh West and Rep Mark Lawson for holding the interim study last year which started the process. Thank you to Senator Paul Rosino for carrying the bill on the Senate side.  Floor leaders Jon Echols and Kim David for bringing it to the floor. Senate Pro Tem Greg Treat and Speaker Charles McCall for their support. Committee Chairmen Represenative Mark Lepak and Senator Marty Quinn for moving it forward. Senator Hall, Weaver, Bergstrom, Simpson, Quinn debating in favor of the bill.  State Treasurer Randy McDaniel for his endorsement. Last but not least the 140 legislators voting in favor of the bill.

If you would like to see the proceedings on Friday in the Senate see who debated in favor of and against the bill click below. When landing on the Senate Video site on the left click on NEW RECORDINGS then click on the Senate seal select Session 15:32 thru 20:41 the bill is introduced at 4:50:03 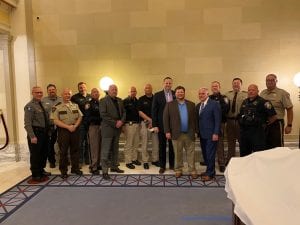 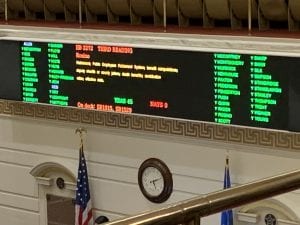 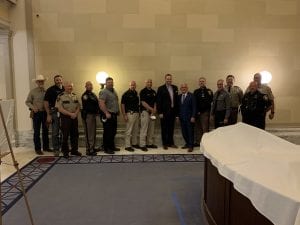 We can go back in the history of the OSA to the day it was formed in 1991 and see that the leaders of the association have been fighting for a decent retirement for their employees. Over the course of the last twenty nine years many attempts have been done. This year for the first time we are closer than ever in providing new hires of Deputies and Detention Officers a twenty year retirement.

Many do not realize that Deputies and Detention Officers are under the Oklahoma Public Employees Retirement Systems rule of 90. Which means their age and time of service have to equal 90 before they can even think about retirement. For a Deputy to begin receiving full, unreduced retirement benefits when you are at least 60 years of age and the sum of your age and years of service equals 90.

County law enforcement is some of the lowest paid in the state and their is nothing that can be done to increase their pay based of time in or how well they do their job. The Sheriff is losing good employees to those who offer better pay and better benefits every day.

The retirement bill sitting in the Senate as the clock ticks down for it to be heard has passed the House Committee and voted off the floor 95-0.  The actuary did not expect major changes, based on their professional experience, and would not expect those changes to materially affect OPERS. Basically no cost to the state of Oklahoma. If approved this retirement system will entice new recruits to consider continuing employment for at least the twenty-year period.

This is the time for the Senate to do what is right and pass this most important piece of legislation in the history of the office of Sheriff.