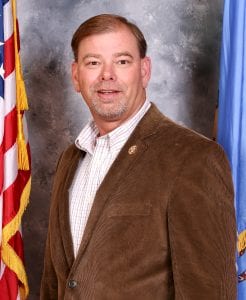 As Congress considers legislation to increase the size and weight limits for tractor-trailers—including longer double trailer trucks—law enforcement and local government leaders are traveling to Capitol Hill to tell Congress they don’t want motorists in their towns to be forced to share the roads with bigger trucks.

One of the leaders headed to Washington is Payne County Sheriff R. B. Hauf, who strongly opposes any increases to truck sizes or weights. Hauf is a Past President of the Oklahoma Sheriffs’ Association and serves on the Highway Safety Committee for the National Sheriff’s Association, which also opposes these increases.  In Washington, Hauf plans to meet on Wednesday, May 16, with the members of Oklahoma’s Congressional delegation.

“Heavier and longer trucks mean higher safety risks for Oklahoma motorists and first responders alike,” said Hauf. “Having first hand knowledge of what happens with bigger trucks, I know this is a bad idea,” he added. “My goal will be to educate our members of the Oklahoma delegation and, hopefully, make them understand Congress should not pass legislation to allow longer and heavier trucks.”

A handful of the country’s largest trucking companies including FedEx and UPS are lobbying Congress to require every state to allow even longer double-trailer trucks, the so-called “Double 33s,” which are 17 feet longer than today’s 53-foot single-trailer trucks. Another proposal being floated by large shippers in Washington DC is to increase national truck weights from the standard 80,000 pounds to 91,000 pounds—an increase of 5.5 tons.

“No one would argue that trucks aren’t critical to the economy. But we also need to factor in what is the right thing to do,” said Hauf. “The severity of a crash is determined by the speed and size of a vehicle.  The bigger the truck, the more likely injuries will become more serious, or worse, result in a fatality. We need common sense laws that will protect our residents, not increase their risks on the road.”

Regarding the heavier trucks, USDOT found in limited state testing that they had significantly higher crash rates: 91,000-pound trucks were 47 percent higher, and 97,000-pound trucks were 99 to 400 percent higher than trucks weighing 80,000 pounds. Heavier trucks also had 18 percent higher brake violation rates. This is a critical finding because the Insurance Institute for Highway Safety (IIHS) published a large-truck study in December of 2016 that found a truck with any out-of-service violation was 362 percent more likely to be involved in a crash.

Hauf is also concerned with other findings published in USDOT’s Final Report to Congress that point to additional infrastructure damage caused by bigger trucks.

“Bigger trucks will cause more damage to Oklahoma’s bridges and roads. At a time when all levels of government are struggling with budgets, adding additional stress does not make sense,” said Hauf. “Money spent to address the damage bigger trucks will cause means there won’t be money spent to hire additional officers to keep criminals off the streets. We need to decide on priorities.”

The American public also opposes increases in truck size or weight. A nationwide survey conducted earlier this year found that 7 out of 10 likely voters oppose heavier and longer trucks on the highway. The Coalition Against Bigger Trucks commissioned the live-operator poll of 800 nationwide respondents, and the survey had a margin of error of plus or minus 3.5 percentage points.

Hauf joins like-minded law enforcement officials from 19 states in making the trip to Washington at the invitation of the Coalition Against Bigger Trucks (CABT), a nonprofit grassroots organization opposed to legislation that would make trucks longer or heavier.