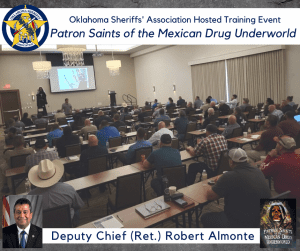 On August 22, 2022, the Oklahoma Sheriffs’ Association had the opportunity to host award winning instructor, Deputy Chief (Ret.) Robert Almonte. Deputy Chief Almonte instructed Oklahoma law enforcement on Patron Saints of the Mexican Underworld. It was held here in Edmond at the beautiful Hilton Garden Inn, with 67 in attendance, including state and local law enforcement, and a handful of state legislators. Deputy Chief Almonte was able to bring to light the ever-growing issue of cartel involvement in the criminal activities affecting our communities. The course included intense education on identification of symbols, idols, and fundamentals of cartel ideology behind their operations. We are thankful for the time Deputy Chief Almonte took to educate our first line responders and local legislators and assisting in the Oklahoma Sheriffs’ Association’s goal of providing a safer, stronger community for those we serve.

Robert Almonte was appointed by President Obama as the United States Marshal for the Western District of Texas in 2010 where he served for six years. He had previously retired from El Paso, Texas Police Department after 25 years of service. He spent most of his career in narcotics investigation and retired as a Deputy Chief in 2003. Robert has been interviewed by Good Morning America, Fox News, the New York Post as well as international media outlets regarding his expertise on the Mexican Cartel 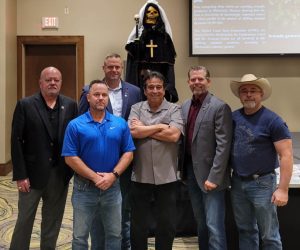