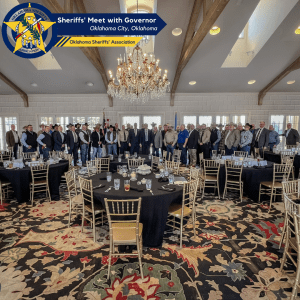 At the invitation of the governor, over sixty sheriffs and undersheriffs attended a luncheon yesterday. This is the first time that a sitting governor has invited all 77 sheriffs to the mansion. The meeting also included Attorney General O’Connor and legal advisors from the governor’s staff. The focus of the meeting was what county law enforcement is experiencing under the

new McGirt ruling. Several sheriffs gave first-hand accounts of tribal member arrests that led to no information in regards to prosecution; the lack of prosecution on tribal inmates that assault county law enforcement officers; and negotiations for plea deals that involve sending a defendant to other county jails to serve their time. With this in mind, the sheriff’s overall stance on McGirt does not affect how they enforce the law for all citizens of their county. When a 911 call is placed and a deputy is requested to come out, they will not ask if it involves a member of a recognized tribe. It is the sheriff’s responsibility to help and assist all citizens of their county and they will respond accordingly. This is the message that was conveyed to Governor Stitt, Attorney General O’Connor, and the Governor’s staff.