On February 6th, 2018, The Oklahoma Sheriffs’ Association held a press conference at the Oklahoma State Capitol to announce that we are supplying every Oklahoma Sheriff and their Deputies with a dosage of NARCAN® (naloxone HCI) Nasal Spray 4mg.  NARCAN® is the drug that can reverse the effects of an opioid overdose. The event held at the Oklahoma State Capitol also provided a demonstration by Logan County Reserve Deputy, Dr. Bill Worden, of how law enforcement can easily administer the life-saving drug.

This donation effectively provides every Sheriff and Deputy in the state with a dosage of the opioid antidote to use in emergency overdose situations. The donation from the Oklahoma Sheriffs’ Association makes Oklahoma one of the only states to outfit county law enforcement with the opioid counteractive agent. Training and free NARCAN® dosages will be available to County Sheriffs through the Oklahoma Sheriffs’ Association. Trainings are being scheduled now throughout the state with the first taking place on February 7th, 2018 at the Embassy Suites in Norman.

“Nearly 1,000 Oklahomans are killed by prescription drug overdoses every year,” OSA President and Pawnee County Sheriff Mike Waters said. “There are over 1,800 deputies in the state of Oklahoma. It is our hope that this donation from the OSA will permit our Sheriffs and deputies to save lives in the event of an overdose by administering the drug in those emergencies.” 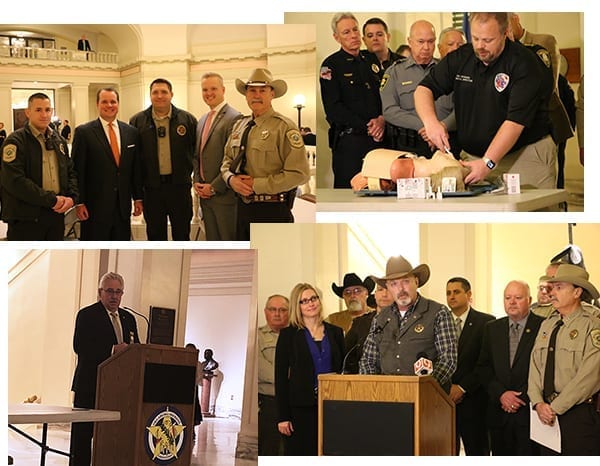