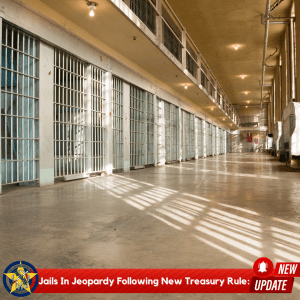 Just before Thanksgiving, we learned that Alabama sought to spend $400M of COVID relief on new prisons—five times as much as it plans to spend on hospitals. And now as we kick off a new year, it’s clear that it’s not just Alabama who wants to pass off prisons as COVID relief—but almost half the country.

At least 17 states across the US are angling to use at least $830 million of their federal Covid relief funds to build new jails and prisons, ranging from tiny $8,000 projects to the hundreds of millions. These funds would all come from the near party-line passage of The American Rescue Plan Act (ARPA).

The Treasury has now released guidance to states essentially saying, “not so fast…” making it clear that new prison construction is not a sanctioned use of COVID relief funds. Their new policy states, “Treasury presumes that the following capital projects are generally ineligible: Construction of new correctional facilities as a response to an increase in rate of crime [and] Construction of new congregate facilities to decrease the spread of COVID-19 in the facility… because such construction is expected to be more costly than alternative approaches that may be equally or more effective in decreasing the spread of the disease.” This has left states scrambling to find and justify loopholes, or otherwise have to revert to using COVID relief for what people might view as more relevant–healthcare, job creation and education, for instance.

Alabama and others had argued that building new facilities would have more total space per person and therefore be a Covid mitigation measure. Treasury clearly rejected that idea in their recent rule.“Construction of new congregate facilities, which would generally be expected to involve expenditures greater than $1 million, would generally not be a proportional response to mitigate or prevent COVID-19, because such construction is generally expected to be more costly than alternative approaches or capital expenditures that may be equally or more effective in decreasing spread of the disease,” the Treasury’s rule said.

ARPA was intended to help ease the stress of the COVID 19 pandemic on states and cities, many of whom are reliant on sales tax and similar revenue streams that were expected to plummet throughout the pandemic. While some states, like Alaska, definitely struggled, others like Alabama posted record tax revenues. And yet, Alabama Governor Ivey is claiming based on lost revenue that they should be allowed to use the funds to build new prisons.

This is likely to ignite a local battle, one of many we should expect to see across the country as citizens see budget gaps in healthcare and education that they want to be filled instead. Additionally, as the state of Alabama seeks investors to complement the budget for prison construction, it’s likely to create the sort of confusion and risk that is anathema to investors who need to know if state support is going to be rock-solid or not.

At Least 17 States Will Need a New Plan

The following list reflects state and county-level ARPA projects tracked by the National Association of Counties and the extensive work of local journalists across the country.  This list is by no means all-inclusive but gives a sense of how broadly states had intended to use covid relief funds for prisons before this new ruling was issued.

Purpose: Two projects, one in Washington County and another in Miller County

Purpose: Planning and design stage, the intention is to increase jail capacity, with the proposal citing overcrowding in Pasco County

Proposed Price Tag: Up to $20 Million

Purpose: Pulling up to $3 million from ARPA for jail expansion in Knox County

Purpose: Expansion to booking area and bonuses being proposed by Eau Claire Sheriff

Looking at the 17 states who proposed using relief funds for prisons, what adds insult to injury is that many notoriously already have underfunded health care systems and underachieving schools. Three of the five states with the lowest life expectancy are on the list — Alabama, Arkansas and Mississippi. Four of the five least educated states are as well — Alabama, Arkansas and Mississippi, plus Louisiana. If there’s a case to be made regarding prisons and COVID, it’s that reducing the prison population will free up desperately needed funds towards essential services. This is why there are many examples of bipartisan action on criminal justice reform—because if Republicans and Democrats agree on anything, it’s that we shouldn’t waste tax dollars. Prisons are already cash sponges, draining the community of resources that can help stop crime a decade or more before it starts.

So why prisons over healthcare and education? Arguments are thin at best. Prisons don’t solve economic problems, prisons themselves are a problem. They are a net drain on the national economy, with an estimated $80 billion in direct costs, and as much as $1 trillion in broader societal costs to families. This far dwarfs the temporary construction jobs and scant, low-to-moderate paying positions as jailers or staff that are created and masquerade as COVID relief. At best, in some cases, counties want to build new prisons to address overcrowding and poor services (a use case that the Treasury rejected). But of course, the best way to stop overcrowding in prisons and jails is to simply incarcerate fewer people—with more diversionary programs, drug treatment and mental health services.

Waiting For Leaders’ Final Decisions, Citizens Plead For Money To Go Anywhere Else

Whether this help should go to prisons and jails or diversionary programs is another hot debate. Collin County in Texas plans to use $134 million (or 2/3rds of the county’s ARPA funds) for an expansion to the adult detention center, for instance, plans to have new “specialized housing areas will also address the growth in substance abuse resulting from the public health crisis.”

While prisons are one place medical care can be provided, this plan requires consideration in the context of what $134 million could buy. The other projects on the docket are a new health services center ($54.8 million) and a new medical examiner building ($12 million). Could funds be further used to beef up mental health services outside prisons–so that people need not land there in the first place?  It’s also important to note that Collin County, which contains part of Dallas, has been under immense scrutiny after Marvin Scott, an inmate who experienced schizophrenia, died at the county’s Detention Center.

“Prisons inherently have a degenerative effect on someone in a mental health crisis,” Civil rights attorney Lee Merritt, who represented Scott’s family, told Dallas Morning News. “Starting at the door, the first thing [jailers] need to be doing is a mental health screening and rerouting people in a crisis to a different facility.”

If a state wants to address prisons as part of their COVID relief efforts, the best way they could stimulate economic growth is by simply locking less people up. A joint project by researchers at Washington University of St. Louis, University of Chicago and Brown offered the following guideposts for lessening the burden of mass incarceration on families, which in turn would significantly improve their financial welfare:

Thanks to Starkey Baker for their contributions to this piece. Full disclosures related to my work here. This post does not constitute investment, tax, or legal advice, and the author is not responsible for any actions taken based on the information provided herein.