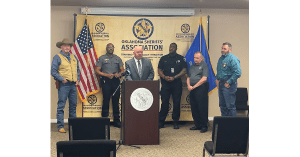 Last week, the OSA had the privilege of taking part of a nationwide campaign press release. The Drive Smart Campaign is a cooperative effort between the NSA and NHTSA. The PSA was filmed in Oklahoma with Retired Sheriff John Whetsel and country music legend Toby Keith. Sheriff’s Damon Devereaux, Tommie Johnson III, Chris West, and Chief Deputy Marcus Williams also took part in the press release and all had Deputies that appear in the video. The PSA will be released to over 1,900 TV outlets and radio stations.

The OSA recently formed a Traffic Safety Committee, and the purpose of the Traffic Safety Committee is to work with Sheriffs across Oklahoma to develop methods and ways to save lives. This committee will be actively taking part in the NSA and NHTSA commitment to reducing the number of crashes, collisions, or wrecks in Oklahoma.

Below is  the PSA video.