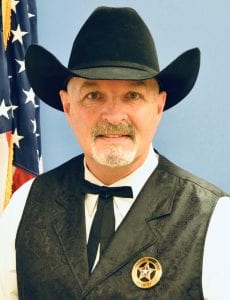 “This is a huge honor, and I’m very humbled at the opportunity,” said West, who ran unopposed. “I look forward to working with Sheriff Stanforth and other members of the NSA executive committee and board of directors, as well as other law enforcement professionals, agencies and associations across this great country to be a voice for our communities on public safety and law enforcement issues impacting every citizen of this country.”

West in January began his second, four-year term in office as Canadian County sheriff after not being challenged in his re-election bid.

West was elected to the NSA board of directors in June 2019, serving in that capacity for the past two years. Oklahoma had not had a representative on the national organization’s board in about 20 years.

“It bodes well for the State of Oklahoma that he was elected to the board of directors and, this year, was able to secure the election for the national secretary spot,” McNair said.

Sheriff West is a well-recognized face across Oklahoma.

“People know him all over the state,” McNair added. “They just know him when they see him, he’s that kind of figure – even at the State Capitol when he’s speaking about Oklahoma’s sheriffs.

Sheriff West decided to run for the NSA executive committee earlier this year, submitting his notice to seek the office of secretary.

NSA President Stanforth called it an honor to have been able to swear Sheriff West into this “very important” leadership role.

“His citizens should be very proud that their sheriff is serving not only their county, but sheriffs and their constituents from all across the country,” said Stanforth, of Fayette County, Ohio.

The NSA is one of the largest nonprofit associations of law enforcement professionals in the United States, representing more than 3,000 elected sheriffs across the nation. Membership totals about 14,000 individuals.

NSA is dedicated to raising the level of professionalism among sheriffs, their deputies and others in the fields of law enforcement, public safety and criminal justice.

Oklahoma City will host the NSA’s national conference in June 2024, when Sheriff West will be the organization’s incoming first vice-president.

“That will be a huge impact to the city and state,” OSA director McNair said. “We’re going to be bringing in over 3,000 sheriffs from across the country to a weeklong convention.

“To bring this to Oklahoma is a huge deal. The last time the national conference was here was back in 1992 in Tulsa.”

He served 28 years with the Oklahoma Department of Public Safety, retiring from the Oklahoma Highway Patrol on Dec. 31, 2012, as a captain.

West was appointed Canadian County undersheriff on Jan. 2, 2013. He worked in that capacity until he took office as the elected sheriff on Jan. 3, 2017.

Sheriff West also serves as the first vice president of Oklahoma’s state organization. And he will become OSA president in October.

“Because of his background as a public information officer, we’ve used him as a spokesperson for the organization and he teaches at the sheriffs’ academy,” McNair noted.