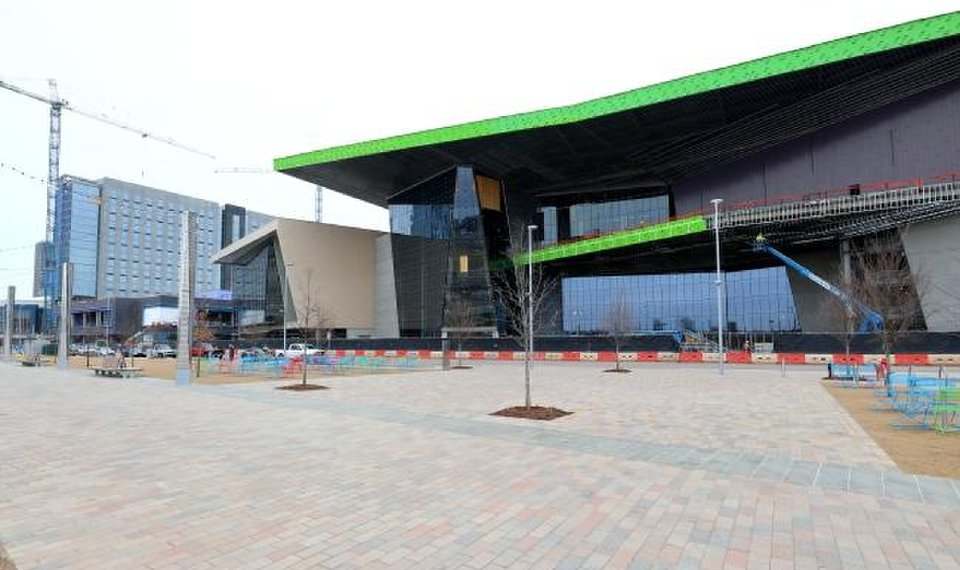 Interior construction is starting up at both the Omni Hotel, left, and the Oklahoma City Convention Center. Both will be up and running in early 2021. [Doug Hoke/The Oklahoman]

National and international conferences are booking the new Oklahoma City Convention Center
for visits going through 2024 while the adjoining future Omni Hotel is reporting success booking
rooms as both venues prepare to open by early next year.

Mike Carrier, president of the Oklahoma City Convention and Visitors Bureau, said Tuesday
seven national and international organizations have signed contracts for conferences and
conventions to be held at the new convention center, which is set to open later this year.
Organizers anticipate a total of more than 37,000 room nights and $20 million in direct
economic impact from the bookings, which include the 2022 and 2024 Legal Shield
international conventions.

“It’s an honor to be the host city for such high caliber conferences,” Carrier said.“The new
venues and infrastructure throughout downtown show OKC’s commitment to the meetings and
convention industry, and we can now provide a unique attendee experience for even larger
events.”

The Greater Oklahoma City Chamber and the Convention and Visitors Bureau’s efforts to add a
new convention center and hotel date back more than a dozen years. The $288 million center,

Interior construction is starting up at both the Omni Hotel, left, and the Oklahoma City Convention Center.Both will be up and running in early 2021. [Doug Hoke/The Oklahoman]funded through MAPS 3, will feature nearly 275,000 square feet of dedicated meeting space

Carrier admits booking the new convention center is challenging. The current Cox Convention
Center has long been considered inadequate to attract the larger conferences that the city will
accommodate with the new venue.

“Booking a new facility like this is complex, especially when you have a hotel as a component,”
Carrier said. “You have to have them getting their operation up and running. And Oklahoma
City is not as well known to the industry as we will be when we have the new convention
center.”

The 2024 National Sheriff’s Association convention (with an estimated 4,000 delegates) and
the 2022 Annual Conference for International Economic Development Council are among the
higher profile bookings.

“The National Sheriffs Association is a very good convention, fairly large, and we’re delighted to
have it,” Carrier said. “The local folks have been very involved in getting them here. And that is
kind of it works — you get a strong local champion and that goes a long way in bringing them to your city.”
Carrier said the 2022 International Economic Development Council will bring delegates involved
in site selection and economic development whose impact on the city might extend longer after
their visit. The 2021 National Brownfields Training Conference for the International City/County
Management Association, meanwhile, will see direct results of brownfield site contamination
cleanup efforts with both the convention center, Omni and Scissortail Park being assisted with
the federal program.

Ryan Eshelman, project manager with GSB overseeing the Omni construction, said the hotel is
close to being fully enclosed and that hotel rooms are being finished out on the lower floors.
The hotel will feature 605 guest rooms, inclusive of 29 suites, and will offer seven dining
options, a pool deck with event space, retail, 78,000 square feet of indoor and outdoor meeting
space and a Mokara Spa.

“The project is fully on schedule,” Eshelman said. “One of the tower cranes will be coming
down shortly and they will all start disappearing from the skyline over the next six months.”
Eshelman estimated up to 500 people are working on the site on weekdays with about 270
working on Saturdays to keep the project on schedule.

Dan Boyer, director of sales for Omni, is assembling a staff for prebookings and estimates hiring
will ramp up significantly this fall. He said the hotel will have a quiet opening in January 2021
but won’t fully be open for large groups until March 2021. 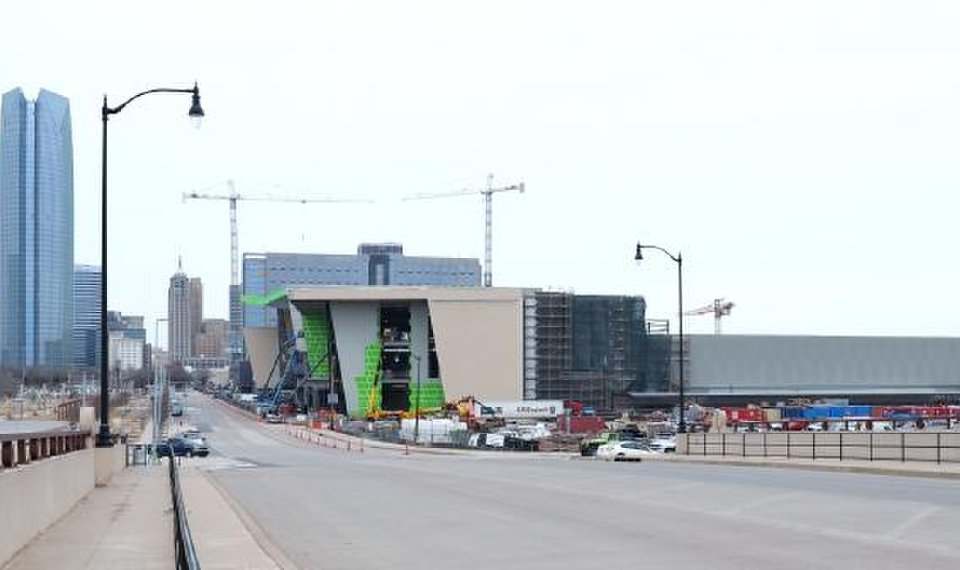 “Omni likes to have 45 to 60 days to work out the bugs and complete staff training,” Boyer said.
“We will be hiring our general manager by March and we will ultimately employ between 350
and 375 associates.”

Bookings are continuing for the Cox Convention Center, which turns 50 years old in 2021. Civic
leaders and planners are expected to start discussing future redevelopment of the property this
next year.

“There may be situations where the new convention center is full and we may need to move
somebody to the Cox Center,” Carrier said. “It depends on how long the city keeps it open —
they’re talking about as long as three years.”
The