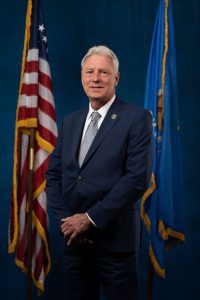 Sheriff Dougherty has had an impeccable law enforcement career spanning over 40 years, advancing from police officer, police chief and finally, the sheriff of his county for the past 12 years. His image and trust from the community is unmatched, and he has run unopposed three of the four times he has run for sheriff.

He has done a great deal in bringing the sheriff’s office up to date, as well as implementing multiple programs that benefit the county. When he took office there was only one computer, now the office is equipped with the technology and resources needed for his staff. He maintains constant law and order within his boundaries – spanning 966 square miles with over 34,000 citizens -and his excellent leadership skills have enhanced safety within the county by cementing ties between his agency, state law enforcement agencies, and local police departments. Sheriff Dougherty hosts monthly meetings with all agencies within his county, and these meetings have encouraged unification and cooperation within law enforcement agencies. Additionally, he hosts an annual 40-hour training program that ensures his deputies, police officers and state agents are receiving the same type of training to help further cooperation between agencies. 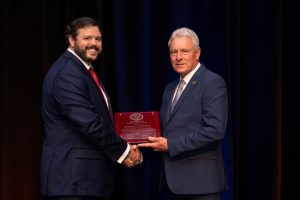 This sheriff is often described as a “working” sheriff; someone who never fails to respond to a crime scene, and is usually the last on the scene. His presence and leadership on a crime scene has been said to provide a calming effect for deputies, officers, and state agents. OSBI Special Agent Derek White writes “I am impressed with Sheriff Dougherty’s leadership abilities, his knowledge in law enforcement operations, concern for his citizens, and his spotless career. He is fully deserving of being inducted into the Sheriff’s Hall of Fame. He has demonstrated and maintained the highest degree of character in his career, and it is reflected within all departments across his county.

Please help us welcome Sheriff Charlie Dougherty of Lincoln County, into the 2022 Sheriff Hall of Fame.