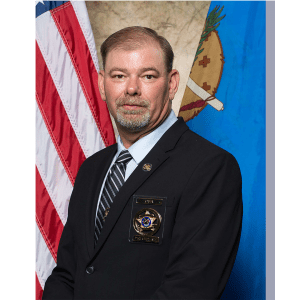 This public servant has been with the Sheriff’s Office for thirty years and some say he grew up in the Sheriff’s office. He began as a dispatcher and jailer before being promoted to deputy. He served in that capacity for 15 years, before being promoted to Investigator. He continued to rise through the ranks of the Sheriff’s Office until he was elected Sheriff overwhelmingly defeating the incumbent sheriff. He has been unopposed in the last two elections, indicating overwhelming community trust and support for the work he is doing.
After he took office, he made many changes to streamline and modernize the department. He instituted a chain of command to include captains, lieutenants and sergeants. He issued standard department pistols and provided patrol rifles and back-up pistols for the entire department, as well as rifle rated body armor. He added on-board computers in all patrol cars, making the deputies jobs much more efficient. He added the Sheriffs office to the federal surplus which allowed the department to access armored vehicles and other surplus equipment, which was a huge cost savings to the department.
Since taking office, the working relationship among area law enforcement agencies has grown into a unified front. There is excellent cooperation and camaraderie among agency leaders, and they all have a great deal of respect for one another and their respective agencies. The district attorney’s office has also enjoyed the positive working relationship they have with the Sheriff’s Office.
When asked to describe his Sheriff as a leader, One of his Lieutenant’s said, “The Sheriff understands everyone’s job because he has done it all! He is not afraid to jump in the trenches with us, no matter what must be done. He shows up at 2AM on calls to support us, even when we have enough manpower on the scene. He can be found cleaning when we are shorthanded or doing other maintenance type jobs to save the department money. He cares about all of us and treats us like family. He truly has our best interest in mind and regularly reminds us that our families come first.
His influence in law enforcement has not been limited to the County. He has been an integral player in influencing lawmakers to support the Sheriffs of Oklahoma and their communities. His Undersheriff recalls a recent visit to the Oklahoma State Capitol: “While at the capitol, I noticed as we visited various legislator’s office that everyone called the Sheriff by his name. He always answered them by name as well and asked about their families. As the visit moved into the reason we were there, he always received the undivided attention of the legislators. He was articulate and precise about what Oklahoma Sheriff’s needed and why it was necessary. I was amazed with the influence he commanded as we walked around the capitol.”
He has been a leader for Oklahoma Sheriffs across the state, serving two terms as President of the Oklahoma Sheriffs’ Association. During OSA meetings, he has the same effect on Sheriff’s throughout Oklahoma. He is highly respected by his peers for his constant work to advance the office of the Sheriff. He leads and serves on several committees with a true servant’s heart.
He is a quiet, humble servant. He is a regular, ordinary guy who does extraordinary things. He is passionate about people, justice and fairness. He’s a mentor, a role model and just an easy-going guy that is fun to be around. He makes all his employees feel comfortable and supported, and he treats them like family. He truly cares about those around him. That’s what makes him a wonderful, natural born leader. 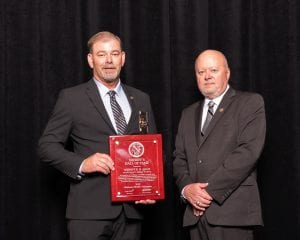 He has served his community well for over 30 years but will retire as Sheriff on September 1st. His influence will be long reaching into the future of the County Sheriff’s Office and the entire state of Oklahoma.