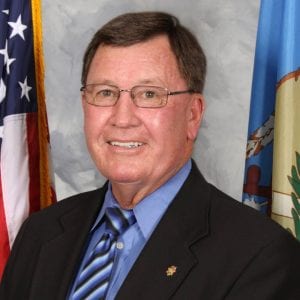 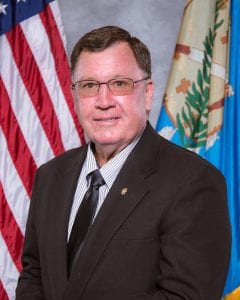 The Oklahoma Sheriffs’ Association was honored to induct Sheriff Don Hewett of McClain County into the Sheriff’s Hall of Fame at our annual Awards Banquet on August 10th, 2018.  The Sheriff’s Hall of Fame award is presented to a Sheriff who has been lawfully appointed or elected for a minimum of ten cumulative years; has provided a high level of service to the Office of Sheriff in Oklahoma through activities of the Oklahoma Sheriffs’ Association; has implemented proactive programs and crime prevention initiatives; has demonstrated leadership to employees, the citizens of the County, and the State of Oklahoma; and has demonstrated and maintained the highest degree of character in their law enforcement career.

Sheriff Hewett has a lengthy resume:

Throughout his tenure as Sheriff, Hewett has promoted the continual improvement of the service and function of the Sheriff’s Office.  His goal has always been to provide the citizens of his County with a Sheriff’s Office whose service to the community is second to none.  He has maintained rigorous standards for his employees, and has maintained these standards throughout his tenure as Sheriff.

Stan Florence writes:  “when he was first appointed Sheriff, it was clear that he lacked the institutional knowledge of administration of a Sheriff’s Office.  On several occasions in those early days he indicated that he doubted his ability to fulfill his new role.  Sheriff Hewett’s wisdom and determination, along with relying on other Sheriff’s as well as the OSA for advice, led him through the learning process.”

Sheriff Booth writes: “he has been a major contributor to forming and shaping the direction of the OSA.  He has been involved in countless successful efforts to get legislation passed to enhance the Office of Sheriff and protect the citizens of Oklahoma.  He has also worked tirelessly to defeat bad legislation that would have had a negative impact on all of us.”

Senator Paul Scott writes: “I personally appreciate his quote he has shared with the community in the past:”

” Law enforcement isn’t about politics.  Your safety should have no price or party.”