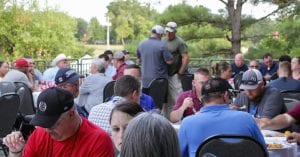 The conference started off with a new event and it was a hot muggy day that felt like 100 degrees in the shade and probably felt like 110 degrees for the Sheriff’s that competed in the 1st Annual Cookout Competition. There was a 130 in attendance to get a taste of what these Sheriff’s cooked up and they enjoyed every bite of it. We had fajitas and all the trimmings from Sheriff Johnny Christian Bryan County, a shrimp boil with corn and potatoes from Sheriff Tony Head Atoka County, BBQ brisket and bologna from Sheriff Tim Turner Haskell County, BBQ cowboy beans from Sheriff Jeremy Floyd Ottawa County, and Fried Fish from Shannon Smith Seminole County. The attendees were given playing cards to drop in a tote and vote for the winner. Some folks said Sheriff Waters could be seen trying to sell additional playing cards to influence the outcome of the vote. In the end, there could only be one winner and the vote went to Sheriff Shannon Smith of Seminole County. The evening capped off with music from Hunter Thomas and the presentation of the traveling trophy. We hope next year to see more Sheriff’s compete in the annual cookout competition.